< Back to the lodge

Masonic Formation: From the Quarry to the Heavens

Masonry professes to “make good men better”. This implies that a good man is the only kind that we should allow through our doors; but even then he must realize that he can become better still- if he will make himself a vessel for the teachings and experiences that “make a mason”.

The attitude conducive to growth is best described by Brother W.L. Wilmshurst in his “Ceremony of Initiation”:

“For every Candidate [the Initiation Ceremony implies that] whatever academic or scientific learning he possesses, whatever philosophical ideas he holds, whatever religious creed he professes, prior to Initiation, there remains something more — indeed something vastly more— for him yet to learn and to which the Craft can help to lead him. This does not mean that he will necessarily discover his previous convictions to be false; on the other hand, so far as they be true he will find abundant confirmation and amplification of them, and so far as they are erroneous or imperfect he will learn to modify them. It means that he must be prepared to find some of his wonted and perhaps even most deeply rooted ideas to be apprehensions of Truth so partial and limited that they operate as obstructions to the wider vision which might be his, and that the more tenaciously he clings to them the more he may be blocking his own light. If, therefore, he is to profit by the Light to which the Craft leads he must be prepared to keep his mind open and fluid and to make such mental self-surrender as occasion warrants.”1

The leaders and existing members of the lodge have a great responsibility in facilitating this inner growth. The process of taking a good man who is a stranger to Freemasonry, and showing him the sign posts along his new road is called “formation”. Put another way, formation is the process by which we change for the better as the lessons of the Craft influence us. It is a slow, deliberate, and contemplative process that requires dedicated study and a willingness to leave behind any vices and superfluities in our lives that no longer serve us. The aim is a rich and dynamic process that involves every aspect of life, an all-encompassing discipline that includes everything that goes into making a man into a Mason, from his first steps in the lodge to his lifelong engagement with the teachings of the Craft. It facilitates “constant transformation through the use of Masonic symbols, rituals, and teachings on a journey of return to the center of our being.”

The ceremony of initiation into the fraternity uses the allegory of stones prepared by an operative stone mason for use in a building. This type of stone, called an “Ashlar” is dug out of a larger piece of rock within a quarry and is roughly shaped like a cube, but is not smooth enough or proportionate enough to be used as any kind of aid in strengthening a wall. Here is where the mason uses his tools and his hard won skills. He uses a chisel and a hammer (wooden, like a gavel) to break off any protruding angles of rock and shapes it into a smooth, proportionate cube. He makes it level on top, plumb on the sides and square in all 24 corners. This perfected ashlar is now fit to be added to the building, where it can contribute to the overall strength and perpetuity of the structure. 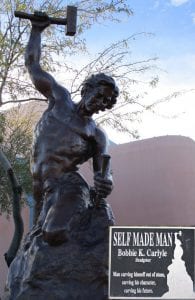 There is a great sculpture by Bobbie Carlyle, called “Self Made Man”, which illustrates this beautifully. We have to be prepared to remove some of the pieces of ourselves that are keeping us from experiencing the life and spiritual connection with Deity that we truly desire.

Learning and study are necessary. The gems of our mysteries will yield to persistent inquiry, and they must be retrieved from their obscured and deep dwelling within our ritual and teachings. “Visit the interior of the earth, and by rectification, you will discover the hidden stone”. It is not surprising that a member of a 300 + year old fraternity with symbolic and ritualistic roots that go back to the ancient world would need some time and teaching in order to fully realize its enormity. What is more surprising is how many members are content with a meager introduction to this inheritance of vast memory and knowledge. Then again, sometimes we don’t know what we don’t know.

Formation from the start of one’s journey in the craft is the antidote to this surprising and sad state of affairs. The last impression a new member should receive is that mentoring in our royal art is an informal, unplanned process that is left to some degree of chance. In reality, giving each candidate a structured process that leads from one degree to the next should be a proactive practice. The intellectual and spiritual development we undertake in the lodge is one of the most important things that happen in Masonry.

Albert Mackey says in his “The Symbolism of Masonry”: The rough and unpolished stone is a symbol of man’s natural state—ignorant, uncultivated, and, as the Roman historian expresses it, “grovelling to the earth, like the beasts of the field, and obedient to every sordid appetite;” but when education has exerted its salutary influences in expanding his intellect, in restraining his hitherto unruly passions, and purifying his life, he is then represented by the perfect ashlar, or finished stone, which, under the skilful hands of the workman, has been smoothed, and squared, and fitted for its appropriate place in the building.”2

As implied by Mackey, these symbols are additionally represented on a larger scale within each lodge. The lodge accepts a good man who shows promise in becoming a strengthening influence in the social structure. This new member is the rough ashlar; and while the Masters of the work see potential, they understand that some preparation, polishing, and whittling will be necessary. Those who have already gone through this process are (theoretically) perfect stones that already lend wisdom, strength, and beauty to ballast and support the lodge. This process takes place under the vision, guidance, and labor of the Master, collectively known as the “designs upon the Trestleboard” (blueprint).

In the ceremony of Initiation these three symbols together are referred to as “the jewels of a lodge”. Considering that jewels are more valuable by weight than most anything else, the meaning here cannot be any clearer. The most precious and valuable thing within a Masonic lodge are it members working under the influence of the Divine Architect toward self improvement and greater wisdom. Or, as Mackey puts it in the same text “The perfect ashlar, therefore,—the stone thus fitted for its appropriate position in the temple,— becomes not only a symbol of human perfection (in itself, of course, only a comparative term), but also, when we refer to the mode in which it was prepared, of that species of perfection which results from the concord and union of men in society. It is, in fact, a symbol of the social character of the institution.”3

The importance of sincere effort applied to the formation of our members cannot be overstressed. Every Mason experiences moments of formation when he considers the craft’s influence on the way he thinks and lives his life.

Familiarity with the system and aims of Freemasonry develops somewhat naturally by virtue of our inspiring and profound rituals and their teachings, and any member with a questing mind will eventually make some progress by osmosis; but why leave “the jewels of a lodge” to random and passive chance? Familiarity is a pale excuse for knowledge and mastery.

No brother should be left on his own to grow and mature in our symbolism when the process of formation can guarantee it. However, two things are necessary for this process to take root and bear fruit:

We should ensure that every member, whether candidate, or past master, is aware that wherever he may be upon the spectrum of Masonic formation that there is still more to do, more to learn, more improvement to be made.

We must have qualified, dedicated formation mentors, as well as the support and interest of all members in assisting one another in the fitting of our ashlars for the builder’s use.

Returning to the idea that Freemasonry professes to “make good men better” we must stop leaving the work to others, realize our role as Master Masons and mentors in this process, and step up to the quarry.

Portions of this post first appeared in the Grand Lodge of California’s “Masonic Formation Mentorship Manual” and are used with permission.

The post “Formation: From the Quarry to the Heavens” first appeared on claremontlodge.org on 10/10/2017.

Maybe you’ve seen the square and compass logo on buildings around town or wondered about the meaning of emblems like the Masonic trowel. What’s the history behind Masonic symbols, and how do they factor into what happens in a lodge?

In this special issue of California Freemason, we take a Masonic road trip south of the border to learn about the long history of Freemasonry in Latin America.

Say hello to a series of brand-new web resources for prospects and new members available on freemason.org, the online home of the Masons of California.

Discuss your Masonic experience with others easily by downloading the simple guide to Freemasonry and brushing up on the basics.

These Masons working with death have an intimate familiarity with the other side.

A tiny, sandy cove, San Francisco’s Aquatic Park is one of the most reliably sunny spots in town. Yet clues of the city’s distant past are still there.

At a Masonic Cemetery, a Forever Home

Beginning in 1852, Masonic cemeteries have provided a final resting place for some of the most important figures in California’s history. From Shasta to San Diego, they’ve brought Masons together to celebrate, mourn, and pay homage.

For Freemasons, Death is Not the End

The Masonic funeral ceremony is often the first encounter of the craft for outsiders—which is fitting, because the concepts of death, rebirth, and legacy are important elements to Freemasonry.

In the newest issue of CaliforniaFreemason, we celebrate life by examining the Masonic customs and traditions related to mortality, death, and whatever comes next.

The Mayor of Dub

In September, NBC’s streaming service, Peacock, debuted a new television adaptation of Dan Brown’s The Lost Symbol which touched off a sudden explosion of interest in Freemasonry and provided a mysterious backdrop to the plot of the story.

Please join us as we celebrate 50 years of service and brotherhood by presenting Worshipful James R. Perry with his Golden Veteran Award!

Please join us Saturday, January 26th for the 107th Annual Installation of Officers

The January Newsletter is Available!

“We Take Good Lodges and Make Them Better”: A Master’s Manifesto

There is an implication that a lodge, being made up of masons who are “good, and becoming better” has by extension the same duty- to be good, and to work to be better. So how can we each contribute to the improvement of the lodge as a whole? That is the focus of this manifesto.

So what’s all this “initiation” stuff about, anyway?

Initiation is not a word one often hears in everyday conversation. Other than a certain gym which calls the first installment of their monthly dues an “initiation fee”, it’s just not used very much. So just what does it refer to and why are Freemasons always using it?…